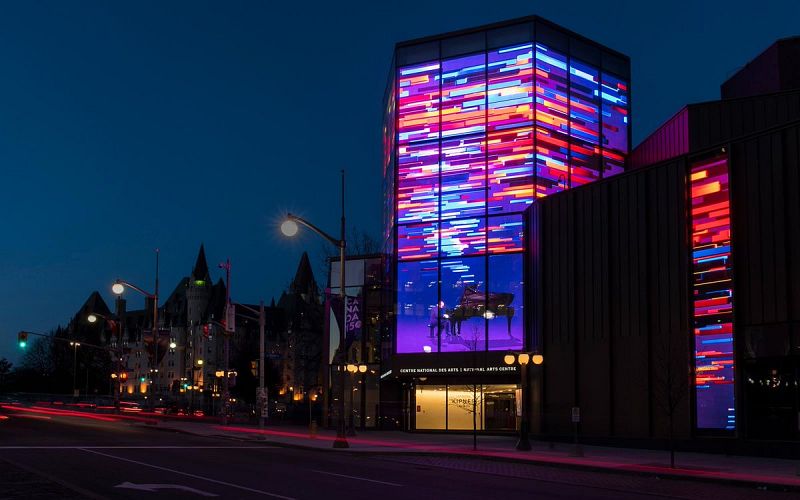 Will we stumble into the future? Or will we embrace the future with mindfulness and a directed outcome?

Managing and accepting technological change should be the bedrock of the 21st century. The pull by technology to brighten one’s future is resisted by the fear of what is perceived to be left in its wake.

AI, advanced manufacturing platforms, intelligent automation, robotics, visual experiential mediums all have one thing in common; they offer advancement to the human race, elimination of fears and putting new controls in your own hands.

My discussion today is on the visual experiential mediums and those impacts on interior lighting, exterior lighting, television, shopping and virtual interactive experiences and vertical farming.

Let’s go back for a moment and understand Gordon Moore’s law. In 1965, Gordon E. Moore – co-founder of Intel – postulated that the number of transistors that can be packed into a given unit of space will double about every two years.

Today, that doubling of installed transistors on silicon chips occurs at a pace faster than every two years.

I take this same argument into the world of LEDs.

Managing and accepting technological change should be the bedrock of the 21st century.

It is this miniaturization that will usher in a new world. A virtual world. A world in which “the magic window” opens.

The Covid-19 virus has indeed opened our eyes to two indelible facts. First, as our population rises and we increase the potentiality of pandemics, we find ourselves isolated. Secondly, we are social creatures and we need each other.

We have also learned to work remotely and that alone offers more advantages and simultaneously exclusion.

The cure will be in our visual mediums.

Today your rooms are ‘painted’ to the color you choose and they will remain that way until you repaint them again.

Enter tomorrow, when Nano-particle LEDs will be ubiquitous and surfaces are painted with LED paint.

Ambient lighting which is projective not reflective will allow you to select the exact kelvin temperature of the room for your comfort. Do I prefer morning light? Do I prefer daytime light under a shading of a willow tree? Or do I prefer the evening with gorgeous rays of light penetrating through clouds on the horizon? This emersion of light will set your daily mood and productivity.

Exterior lighting is so important to set the tone of safety. In 1971 I was on holiday in Europe with other college students and one of our destinations was St. Petersburg, Russia, then known as the USSR. One of the most notable features of this beautiful city was its oppressive nighttime lighting. A dull ominous feeling that kept you inside. Robust cities will project light from their buildings with full spectrum to make visibility much more acute providing an enhanced feeling of safety.

LED walls will be the medium for television–will be life size–and not like anything it is today. 3D affects will be driven by content intelligently formatted to conform to the architecture it is in. The new visual experience of a movie combined with already in use sound systems will ignite new sensory perceptions.

LED walls will enhance shopping and other virtual interactive experiences. Virtual malls will be life size. Cloth shopping and trying them on virtually will be completely private. Ecommerce will thrive in this new virtual world. Virtual visits to the doctor will be accompanied by greatly enhanced virtual vital sensors that can alert the virtual physician to inform you of actual needs.

Food production through vertical farming will be greatly enhanced by LED walls and ceilings and the ability interlace true sun and virtual sun. Food shortages due to climate change and population will no longer be a factor. Vertical farming with LED can be done anywhere that a population exists and growth time can be cut in half.

Now take this moment and;

Imagine a day in which you could choose any time at your whim the color of your rooms.

Imagine a day in which surfaces of all kinds, walls, ceilings, floors, columns, indoors and outdoors could be transformed into digital surface displays and or digital virtual experiences.

Imagine a day in which your home could be transformed into a virtual experience of the universe.

Imagine a day in which virtual reality and reality merge.

That day is next and it is starting now.

Managing and accepting technological change should be the bedrock of the 21st century.

In Light of the Evidence Archive

Who is China to the American?